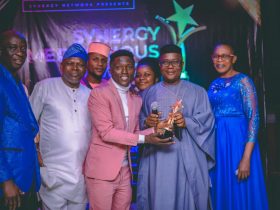 The team at Amazon Studios, an American television and movie production and distributor, has grown. Lala Akindoju, a Nollywood actress with more than ten years of experience in the business as an actor, producer, director, and consultant, will become a member of the Local Original team as the Senior Movies Creative Executive in Nigeria.

Ned Mitchell, the Head of Originals, Africa & Middle East, Amazon Studios, announced on his Linkedin page the three other new executives that will drive the expansion of the streaming service across the continent. They are Kaye Ann Williams (Head of scripted and movies for South Africa), Brendan Gabriel (Senior Unscripted Creative Executive for South Africa), and Mike-Steve Adeleye (Senior Scripted Creative Executive for Nigeria). They join Wangi Mba-Uzoukwu on the Amazon Studios Originals development team.

According to the Amazon jobs site, she will be the point executive on several original movie projects, helping from pitch to production. She will evaluate proposals and pitches and give creative feedback to the talent on treatments, outlines, scripts, production plans/budgets, and cuts. She will also coordinate and work with other departments (Content Licensing, Marketing, PR, Business Affairs, Production Legal, Physical Production, Post Production, and Finance).

Sharing the news on her Instagram page, Lala wrote;

I am incredibly excited to be joining the Amazon Studios Local Originals team as the Senior Movies Creative Executive, Nigeria.

Amazon Studios has shown its commitment to creating opportunities that are laser focused on creatives & content.

It is such an honour to be part of the team committed to making that happen in Nigeria. Not only does it align with my personal passion – growing Nollywood as a whole, as well as growing and honing talent in Nigeria, I get to work with the most amazing and talented team!

Many thanks to Ned Mitchell & Wangi Mba-Uzoukwu for the warm welcome, I look forward to contributing to building Africa’s premiere studio and a home for talent to grow and share their original stories with the world.
@nedmitchell_ @wangistar