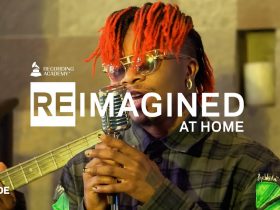 “ReImagined At Home: Oxlade Performs Cover of Skip Marley’s “Slow Down” for Grammys

KAP Film and Television Academy in association with the University of Southern California (USC) School of Cinematic Arts and Netflix graduated her second batch of students who are the first graduates of the Sound Post Production class on Monday, 8th of August, 2022.

The 10-week Sound Post-Production Workshop which started in May came to an end with 11 students learning from industry experts – Richard Burton and Stephen Flick.

The students learned fundamentals like script analysis and sound design, location scouting, proximity, post editorial sound, mixing of the soundtrack, etc amongst others.

At the graduation, the founder of the academy – Mr. Kunle Afolayan admonished the students to put to good use the skills they’ve learned, asked them to be thorough in their work and pay attention to the minutest details when practicing what they’ve learned because filmmaking is an art that requires attention to details, consistency and deep thinking.

The students learned fundamentals like script analysis and sound design, location scouting, proximity, post editorial sound, mixing of the soundtrack, etc amongst others.

Stephen Flick and Richard Burton wished them well in their endeavors and mentioned how it was fun to teach while they learned about Nigeria and its people from the students.
Certificates were presented afterward and the students had a photo session with their family and friends who were in attendance and the academy administrators.

We’re happy to see the change education can make and is making in the world of filmmaking and we look forward to doing more of this for the growth of the industry and the development of interested individuals.