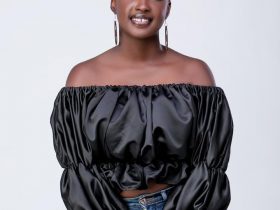 Gideon Okeke has announced his separation from his wife after four years of marriage.

The actor who shared two sons with his estranged wife, made the revelation via his Instagram stories on Sunday, October 23.

Okeke shared that he has joined the league of folks who have been served ‘breakfast’ and is in the process of complete dissolution of the union.

He requested that people put him, his ex and their two children in their prayers and the boys need both of their parents sane to work on their best interests.