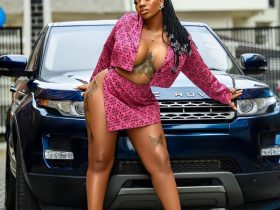 Comedian Bovi Ugboma has raised the alarm about being trailed by his ‘village people’ abroad.

He cried out after noticing a strange ‘occurrence’ in his photo.

The humour merchant, who’s been away with his family holidaying, recently visited the Inter Continental Buck head Atlanta USA where he decided to pose for a photo.

But he was shocked by what he saw in the background of his photo because according to him, it was just in the building when the said photo was taken.

The camera did not just capture Bovi but also what looked like an elderly woman clad in a robe wearing bonnet.

Posting the picture, the utterly startled father of three said: “There was no one in the building when I took this picture. Now zoom and see how scary this can be. My village people have followed me abroad.”