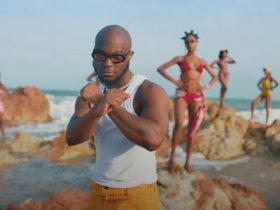 Sit back, relax and jam your speakers to the latest release by the acclaimed Kings of Amapiano, Davido and Focalistic as they team up on another hit track titled “Champion Sound“.

This is the second time the duo will link up on a song after hit single “Ke Star“. In this video, the champions certainly came out to play; there is a large group of people moving to the unique sounds of amapiano while switching from one popular dance step to another. You can’t help but catch the vibe.

The South African rapper, Focalistic is certainly living up to his MTV EMA nomination for “Best African Act”.

Watch the official video of “Champion Sound” below: