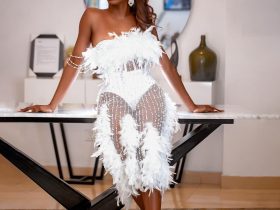 With a combination of self-confidence and a keen eye for fashion, Doyin Served Us Back To Back

Coming off the success of his third studio album “Playboy”, which was released a few weeks ago, Fireboy DML delivers the official music video for the chart-topping track, “Bandana” featuring Asake.

The single was produced by P. Priime, and the video directed by TG Omori.

Watch the music video below: