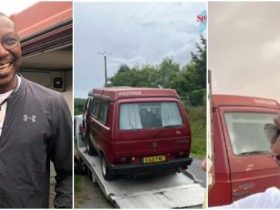 Meet The man who drove bus from London to Lagos

One of the few #BBNaija season 6 housemates that displayed their talent on the program and was prepared to thrive outside of it if given the chance was Adekunle.

His hosting of the press conference and official announcement of the expansion of the broadcast agreement with @wwe, @multichoice group, @supersporttv, and @showmaxnaija, which makes ShowMax the new home of WWE Network in Africa, made the dream a reality.

Adekunle posted the information on social media, captioning his post as the supporters celebrated his victory.

He wrote: It was a good day hosting the Press Conference and Official Announcement of the broadcast partnership extension with @wwe, @multichoice_group, @supersporttv and @showmaxnaija, which makes ShowMax the new home of WWE Network in Africa. This means that WWE Premium Live Events including Wrestlemania, as well as WWE’s Network’s extensive library will be available on the service for streaming.

The event was also to announce a multi-platform campaign called “The Search for Africa’s Next WWE Superstar”.

Follow them on all their social media pages to find out more. Who knows, you might just be the next WWE Superstar