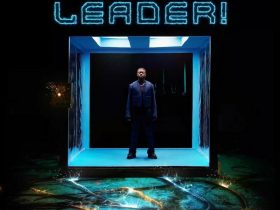 Lojay is back with another single “Leader”

A tearful Anthony Joshua rued his second straight defeat to Oleksandr Usyk after the supremely talented Ukrainian fought back to retain his world heavyweight titles in Saudi Arabia .

Joshua hurled two of Usyk’s belts to the canvas and stormed out of the ring in a fit of pique after letting slip a golden opportunity to hand the Ukrainian his first professional loss.

The 6ft 6ins (1.98m) Briton scented victory when he had Usyk hanging on in the ninth round, only for the mobile southpaw to come firing back and control the final stages for a split-decision win.

“I just spoke from my heart. It has been so tough. You see AJ holding it together. I’m a hustler, so I try to keep things together, try work hard. Make sure my team is good,” he said.

It comes at a cost. It would never break me but it takes real strength and tonight there’s a little crack in the armour.”

While Joshua is left trying to rebuild his career after his third defeat, Usyk retains the IBF, WBA, and WBO titles and will now seek a unification showdown with WBC champion Tyson Fury.

I should have won,” lamented Joshua, who was too emotional to speak for part of his post-fight press conference.

“I adapted, I made the change that I needed to give him more of a competitor. It wasn’t enough but I left everything in the gym,” he added.

Usyk agreed with Joshua, saying: “The reason why the belts are coming back to Ukraine is that Anthony Joshua didn’t use his size advantage to the end.”

Despite the defeat, promoter Eddie Hearn issued a fierce defense of Joshua, who has revitalised British boxing and was fighting his 12th successive heavyweight title clash.

“He’s devastated by defeat because he wanted victory more than anything,” Hearn said.

“We’re all extremely proud of him for giving us a great fight tonight against one of the best that’s ever laced up a pair of gloves.”