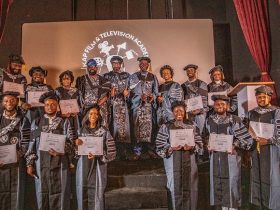 King Wasiu Ayinde Marshall (Kwam1) is currently on the lips of many as he shuts down Lagos State for his 50 years on stage.

KFN reported that preparations were in top gear for KWAM1, as he shut down Lagos.

The city of Lagos stood still as the Mayegun of Lagos, as he is fondly called, marked his 50 years on stage.

Nollywood stars, fans, and lovers of the legendary singer endorsed and promoted the event.From Kolawole Ajeyemi, Ayo Olaiya, Esther Kale, and many other Nollywood stars, even Nigerian billionaire Sir Olu Okeowo, one of the silent billionaires in Nigeria, showed support for him.

The event was star-studded as de creme de la creme in the entertainment industry, business world, politics, and monarchy showed support for him.

The event stirred mixed reactions among netizens as they queried when the Fuji singer started music.

kvng_sylvia: 50 years how old him start to sing? 7

cash moneyoffice: 50yrs on stage bawo how old is K1 when did he start singing his don’t understand please

The Yoruba movie industry stood still for the singer as they came out in large numbers to support him.

Also in attendance were different monarchs and billionaires.

Eleganza CEO, Razaq Okoya and his beautiful wife, Shade Okoya, were spotted at the event as well as silent billionaire, Sir Olu Okeowo.