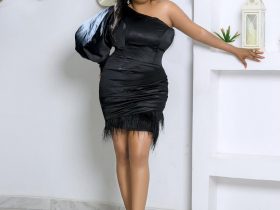 Toyin Abraham, Okanlawon feature in The Stranger I Know

Popular comedian, Anita Asuoha aka Real Warri Pikin has recounted how she nearly killed herself over N22m debt.

In the latest edition of #WithChude, the podcast hosted by Chude Jideonwo, the media personality, recalled how she was taken to “three different hospitals” before she regained consciousness after her attempted suicide.

“Then they carried me to three different hospitals. In the last hospital when I woke up, I was like so I didn’t die? That meant God didn’t want me to die.”

She said the aftermath of her suicide attempt inspired her to venture into comedy “so I can use my story to heal people”.

“Then I told God that I was going to use my story to heal people because I felt like he didn’t allow me to die because he wanted my story to touch people’s lives,” she said.

“To me, it wasn’t a story that I was supposed to keep to myself and I knew the fastest way to do it was online.

“Then I had a small itel phone which I used. If you check, all the videos I did then wasn’t comedy to make people laugh but comedy to motivate people.

” I was always like even if you’re owing debt, the Federal Government is also owing debt, so you don’t need to kill yourself.

“Just take it one day at a time. So I think those things helped me heal because things I was supposed to tell myself, I was telling people.”

“Adieu, Salut,” a short film by Korede Azeez, will premiere on Netflix soon!

Woman Crush: Amazon of the Week Is Doyin David