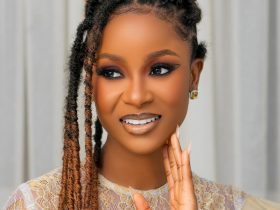 Finally launching her Clothing business, Bella Okagbue did it perfectly, in our opinion.

Empire Mates Entertainment is highly known in the music industry for identifying talents like Wizkid, Skales, Niyola, etc., and also currently manages the affairs of media personality Ekuka and actor Adesua Etomi, to mention a few.

Although White Money’s agreement has not yet been made public, the reality star announced it on Instagram, captioned:

Now that we are in good hands, let the music flow.