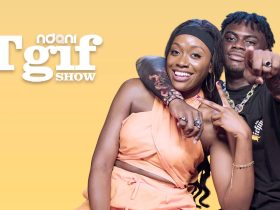 In a hilarious episode of the “Ndani T.V.” show, Daniella and Bryann of “BBNaija” teamed up

Music star Ayra Starr lets us in on her journey from being the confident 6-year old who told choir members who didn’t give her a lead role that “when I become a superstar, you’re not going to tell me that,” to now touring the United States with her music.

Featuring her three siblings, some of her label executives and producers, and two of the cities she grew up in – Cotonou and Lagos – the documentary also gives viewers a sneak peek of Ayra Starr’s creative process and how she unwinds.

“It’s about to happen. I’m about to be this person I’ve always wanted to be,” Ayra Starr says at the end of the documentary and we can’t wait to she her shine brighter.