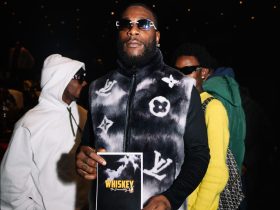 Burna Boy, a Grammy Award winner, is set to perform at Coachella 2023.

A singer, Adedamola Adefolahan, aka Fireboy, had an impressive performance at an event tagged, ‘Pablo The Grand Experience’, at the Cubana Club on Victoria Island, Lagos, last weekend.

His fans were evidently excited as he performed some of his hit songs including ‘Scatter’, ‘Airplane Mode’, ‘Vibration’ and ‘Peru’. They cheered him on and also sang along with him.

Popular socialite, billionaire businessman,  and the owner of the club, Obinna Iyiegbu aka Obi Cubana, was also seen exchanging pleasantries with some people at the event.

The show also had a former BBNhousemate, Chukwuemeka Okoye aka Frodd; and popular socialite, Mike Nwogu aka Pretty Mike, in attendance.